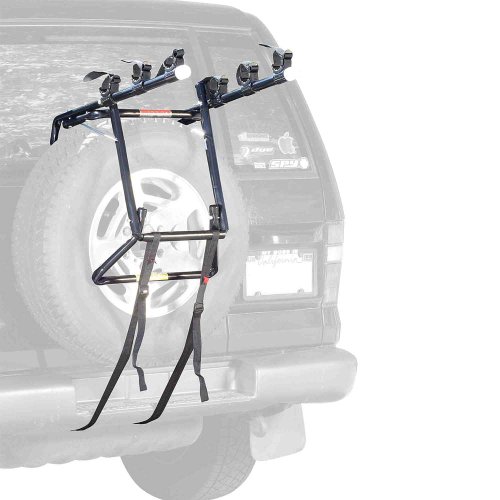 The Allen Deluxe spare tire mount bike carrier can carry up to 3 bicycles on a complete range of externally mounted spare tires. It’s easy to install and utilizes a patented tie-down system to protect the bicycles.Carry your bicycles as securely as possible and avoid the hassles of piled bikes or high-threshold rooftop mounts with the Allen 303DB deluxe three-bike spare-tire mount rack. Designed to fit nearly all externally mounted spare tires–including those with “Over the Tire” third brake lights–the Allen mount rack is both easy to operate and super secure for your bikes. The rack simply hooks over your spare tire, with a patented design that caries your bikes up high, where it’s away from the road and the hot exhaust. The rack’s patented tie-down system, meanwhile, individually secures and protects up to three bikes at once. As easy to install as it is to use, the rack sets up in seconds.

About Allen Bike Racks In 1967, after a few years of working on the aerospace technology for the Apollo missions, Dick Allen was out of a job. Government cutbacks led Allen, a Harvard-trained physicist, to transform his garage hobby into a new industry. A cycling enthusiast, inventor, and family man, Allen had a personal need for a bike-carrying device. On weekends, he would take his sons and wife to Cape Cod or the White Mountains of New Hampshire. What proved difficult time and again was the transport of his family’s bicycles. Rather than fight through inconvenience with twine and a dinged car, Allen sought an answer for himself as well as a market in which he foresaw major growth possibilities.

Always a pathfinder, Allen took to work in his Lincoln, Massachusetts garage in search of a more efficient way to transport bikes. Drafting designs during the day and constructing them throughout the night, he put together a model made of electrical conduit, metal strapping, and fire hose casings (for padding). At first, the Allens tested the prototype on weekend excursions. Finding the first trunk-mounted rack to be a success, Dick started Allen Bike Racks shortly afterward. Dealer acceptance came quickly, and by 1971 Allen Bike Racks were sold nationally through a number of major bicycle distributors. Today, the company owns over three dozen patents and offers a versatile product line of bike racks while Dick’s son Alex now owns and operates the business. What started out as a small garage-run operation now operates three warehouses nationally, two factories abroad, and sells products in more than a dozen countries around the world.